The History of Pantomime 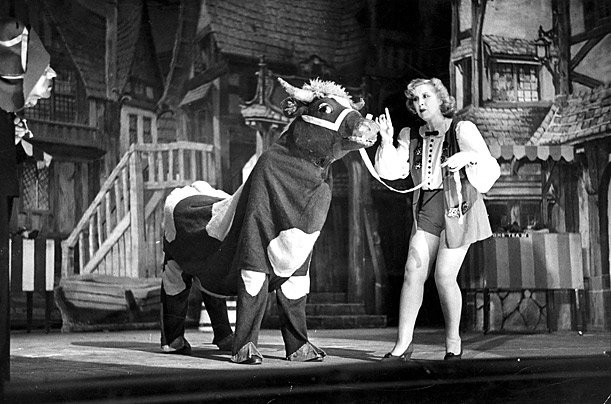 The History of Pantomime or “Panto” as it’s affectionately known in the UK, date back to the middle ages. It blends the traditions of the Italian Commedia dell’arte and British Music hall to produce what’s known as Pantomime. “Commedia dell’arte was a form of travelling street entertainment which originated in Italy around the 16th century.

Commedia was a physical type of theatre that used dance, music, acrobatics, and buffoonery. Troupes of Commedia dell’arte had a repertoire of stories that they performed in fairgrounds and marketplaces. They often consisted of family members who inherited their characters, costumes and stories from parents or grandparents.

Actors would improvise their way through a plot involving characters such as Harlequin and his true love, Columbine. Other stock characters were the overprotective father Pantaloon, who refused to allow the heroic Harlequin to seek his daughter’s affections. In some versions Pantaloon has a servant Punchinello, who becomes a clownish suitor for the hand of Columbine. Punchinello’s character uses comic chases and tricks to full effect.

Although Punchinello has vanished from modern Pantomime, he still exists in the UK as Mr Punch the anti-heroic puppet. Mr Punch and his wife Judy can still be seen in seaside towns and parks entertaining children today.

By the middle of the 17th century Commedia had spread across Europe and reached England. The Commedia dell’arte characters first appeared in English plays in 1660 and they soon became a roaring success. Intense rivalry quickly sprang up between theatres producing them.

In 1716 Lincoln’s Inn Fields Theatre and the Theatre Royal in Drury Lane opened shows with almost identical titles. That was the first tenuous beginning of English pantomime. This peculiar form of entertainment is now as much a part of Britain’s heritage as Shakespeare.

The plot is quite simple: The girl dressed as a boy who is the son of a man dressed as a woman. Will win the other girl (surprisingly dressed as a girl), assisted by a person(s) dressed in an animal skin.

Try explaining that to an American, German or someone from the Far East. Whatever the setting (real world or fantasy) the show will contain all the aspects regarded as necessary to a pantomime. 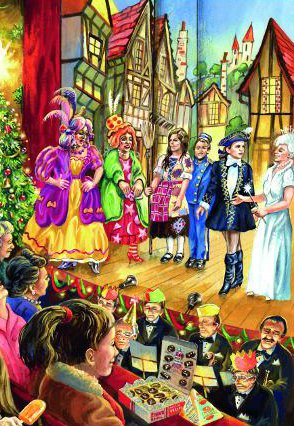 The fairy Queen and the Demon King appear in all pantos, although their exact guise and title may differ. From Old King Rat to modern Fairy Liquid, Peter Pan and Hook, names vary according to the location and topicality. However, certain stage directions always hold strong. Good enters from stage right and Evil from stage left.

This tradition of Evil entering from the sinister side goes back to the medieval mystery plays. The demon would often be projected up through a star trap, appearing magically in a puff of smoke. These traps would always be found in the down stage left position.

This echoes medieval times when the entrances to heaven and hell were placed on these sides. Tradition also dictates that the villain should be the first to enter, followed by his adversary the good fairy.

The story always revolves around the tried and tested formula of good conquering evil. And requires the principal baddie to make all the innocent characters’ lives a misery, from the beginning. But by the end of the show, all the baddies and their henchmen will have either been destroyed. Or as is more usual nowadays, made to see they error of their ways and turn into reformed characters.

Another element of pantomime is the “Principal boy” role. Traditionally the principal boy is always played by a female, although the role is that of a boy hero. The female playing the principal boy usually dresses in short, tight-fitting skirts accompanied by knee-high leather boots and fishnet stockings. In ages past when female attire went all the way down to the ankles. The principal boy role provided a marvellous to display a shapely pair of limbs and to increase the male audience. 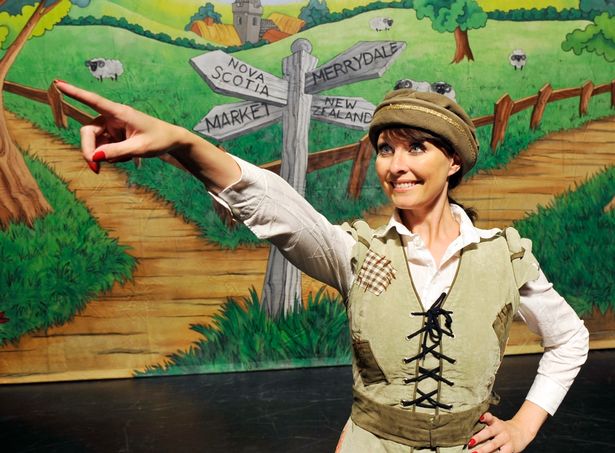 It was common in both Regency and Victorian extravaganzas, both of which played a part in the shaping of pantomime. For women to play, more or less, any male role that they fancied. It is not so commonly known that in the 19th century, women also appeared as Falstaff, Shylock, and Don Giovanni.

The male impersonator, playing the role of a strapping girl in a pair of trousers was loved by Victorian men. But this was a separate and short-lived phenomenon, which has since lost all popular appeal to a modern-day audience.

The principal boy lives on as perhaps the sole survivor of the male impersonator in the theatre. It even beat off the challenge of the swinging sixties when old traditions came under attack in every walk of life. Norman Wisdom took the name part in “Aladdin” at The Palladium in 1946/7 and was followed by decades of popstars. Cilla Black reclaimed the principal boy role in 1971, and it has mostly remained in the hands of the ladies.

Usually played by the prettiest female in the cast and is traditionally portrayed as the epitome of youth and innocence. Although in modern times is generally portrayed as a feisty character, and less as the helpless female of yesteryear. The principal girl will usually be called upon to sing a solo, so must be able to hold a tune. And without exception always ends up “living happily ever after” with the Principal Boy.

The principal boy was one well-established theatrical convention; an even older one was that of men playing female roles. After women moved onto the stage during the Restoration, a tradition remained of men playing some comic female roles. A million miles removed from a drag act; the Dame is a study in female eccentricity. The Dame character is traditionally played by a male member of the cast, dressed in drag. And their entrances are more extravagant and exaggerated than any other character. The Dame is usually portrayed as oldish, unattractive, and common, all qualities which she believes she’s the exact opposite of! She befriends the two principals early on and is instrumental in all the good acts they perform in the story. And often ends up “living happily ever after” with the Principal Girl’s, widowed father/guardian, or with the reformed baddie. 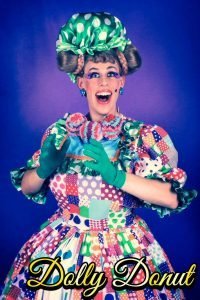 The pantomime dame character emerged from out of the Victorian Music Halls. And was usually cast as the hero’s mother. Widow Twankey in “Aladdin” or Dame Trott in “Jack and the Beanstalk”. The public loved watching well-known male comedians playing the role of Jack’s mother, or Sarah the cook in “Dick Whittington”. Back then female comedians were unheard of, and the tradition of the Dame being played by a man has remained. The Dame is also known for wearing outrageous costumes, and these are often used to good comic effect. The Panto Dame should exude warmth and comedy, even pathos, but is never required to do any “dirty Deeds”. The one exception being the role in “Mother Goose”.

Unlike the dame, the Ugly Sisters always have to tread a thin line between comic characters, and outright villains. The ugly sisters are of course an intrinsic part of the Cinderella story. But versions of them can be found woven into in other pantomimes.

Women did the first portrayal of the ugly sisters, but they were soon superseded by men. And like the dame, this has become a tradition that never changes. 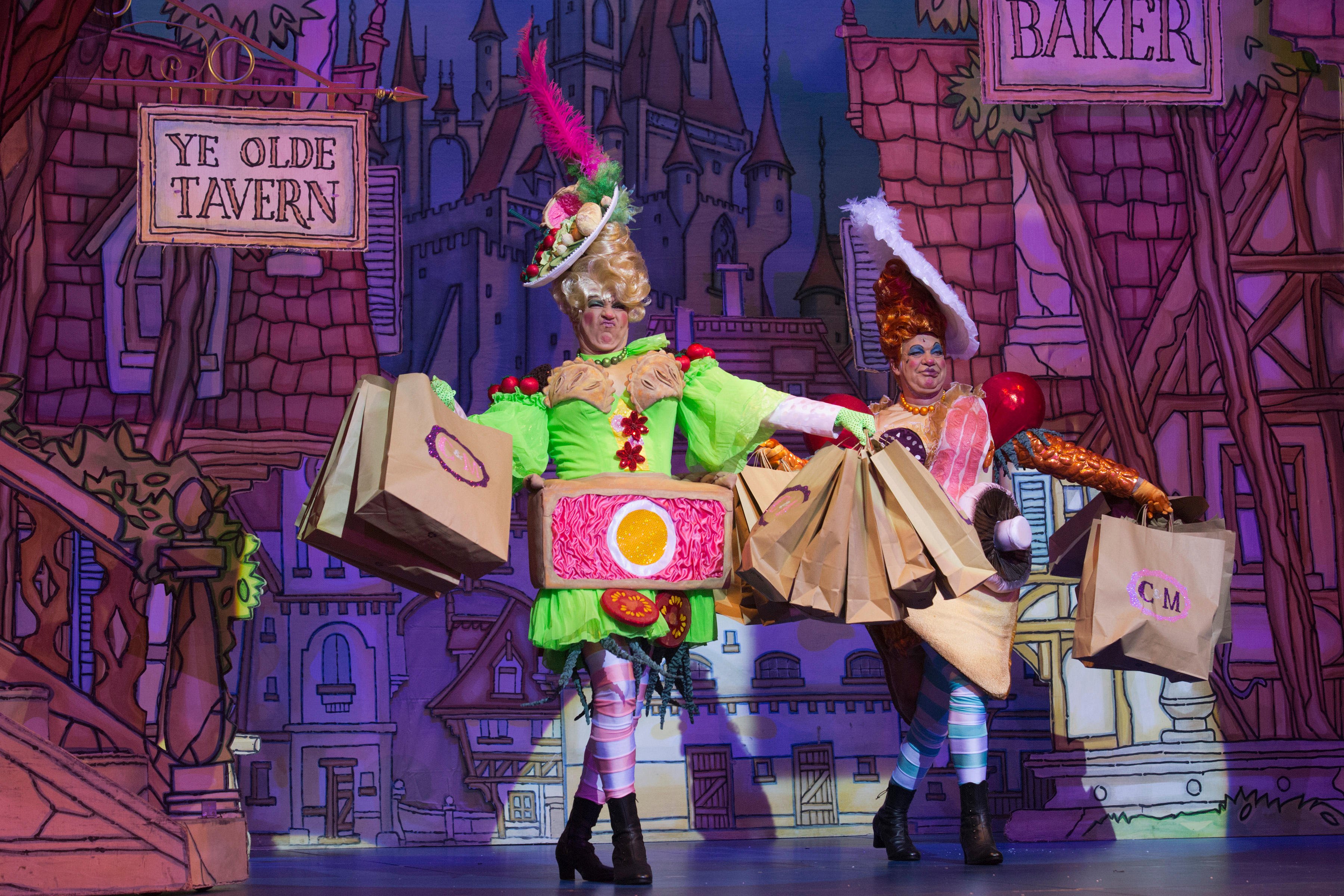 The Chorus and the Juveniles

The element of song and dance in Pantomime is extremely important. And Pantomime wouldn’t be the same without its chorus of singers and dancers, and troupes of juveniles.

Today the average chorus in a small provincial pantomime can number as little as eight. Some shows manage to get by with as little as two professional dancers, supplemented by adult juveniles.

Conversely, the chorus/juveniles in amateur productions can vary enormously depending on the enthusiasm and support in any given community. Some amateur groups can have upwards of thirty juveniles in the chorus.

Every memorable pantomime contains them – and not always the type we have come to expect.

The animals in pantomime are usually depicted by speciality turns in “skins”. Indeed some of the greats started their careers by playing the back legs of the pantomime horse.

Many years ago at the Hippodrome, Stockport, the front end of the horse was a young man named Charlie Chaplin. Animals have always enlisted the audience’s sympathy and support. 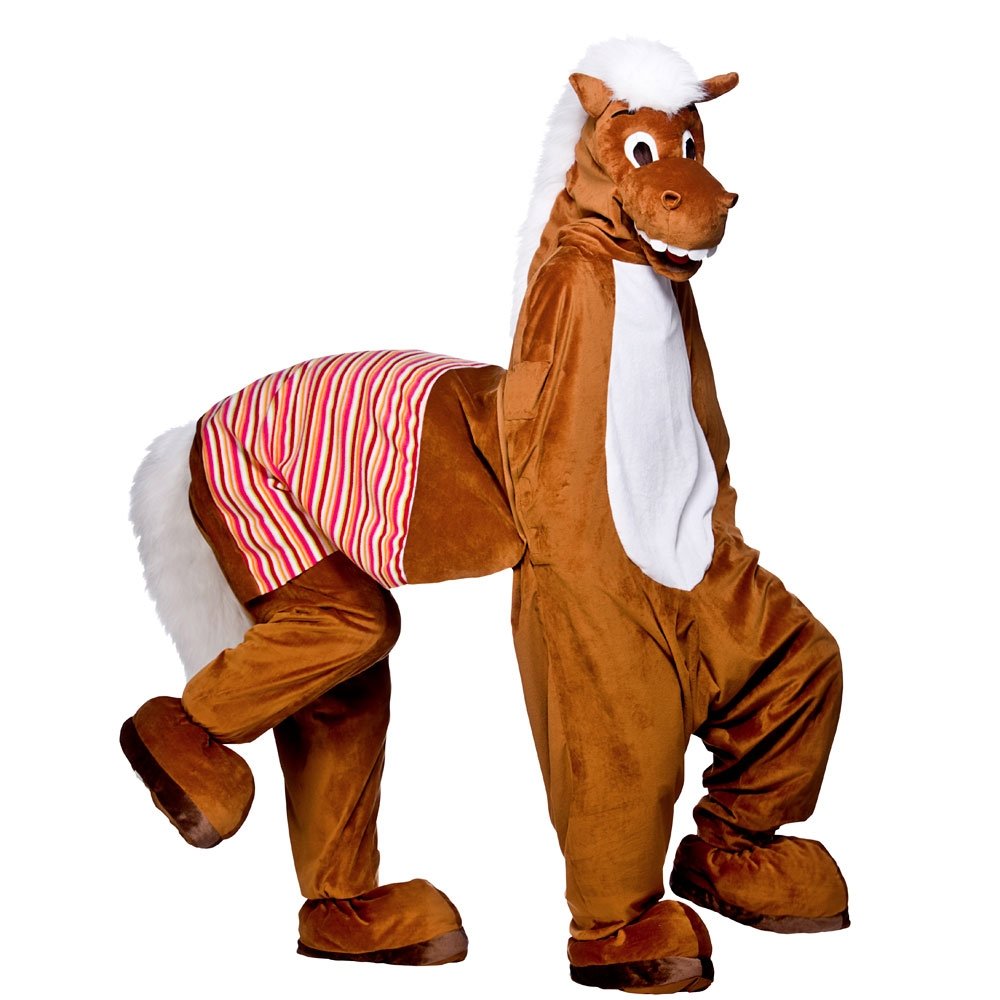 ““Slapstick” takes its name from a device used in these early entertainments, especially in “Harlequinades”.

Harlequin was accorded magical powers, and carried a wooden sword, which alternated, between being a weapon and a magic wand. This sword or bat had a hinged flap, which created a loud “slapping” noise when used. This became known as a ‘slapstick’, and would give a more theatrical effect when used to slap fellow actors.

John Rich’s Harlequin would hit the slapstick against scenery to make scene changes by knocking down sets of hinged flaps. The chase scene would take the characters to many different locations all controlled by Harlequin’s magic bat. The locations of the chase were often named places that people would recognise, but also included mythical locations.

Tabs, or ‘transformation scenes’ are played out in front of the middle curtains. They started as a way of moving between the different sections of the pantomime. And rather than just stopping one section and starting another.

Actors found ever more creative ways to continue the story until the necessary scenery changes had been made. During these scenes, the actors would take off the giant head masks that they had worn for the story. They would also remove their costumes to reveal themselves as the Commedia dell’arte characters.

As pantomime developed and stage technology became more advanced the transformations became events in themselves. Scenery was flown in from above on wires or changed by a series of hinged flaps. And trick objects were often turned around to become another object.

William Beverley introduced a ‘fan effect’ where scenery collapsed sideways and inwards, like a folding fan, revealing another view behind. 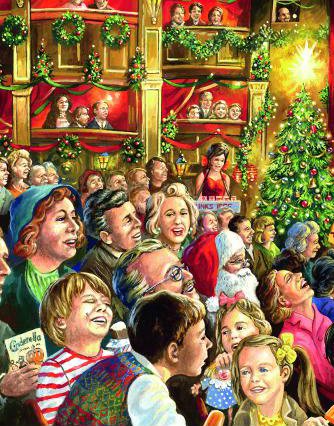 Audience participation is what most sums up what pantomime means to the people in the UK. It is as important a part of English pantomime tradition, as anything previously mentioned. And even the staidest members of the audience, suddenly become unrestrained in their enthusiasm to take part. The audience are actively encouraged to boo the villain whenever they enter, and to cheer the hero. They will also argue with the Dame and warn the hero when the villain is behind them. By shouting out “He’s behind you!”

Here is another example of audience participation.

This back-and-forth verbal jousting between the actors and the audience is an integral part of ‘panto’. Actors will often leave the stage and move amongst the audience to continue this repartee.

Pantomime has survived, by constantly adapting many elements of traditional theatre. The element of “novelty” has been an important factor in achieving this durability. As has its ability to incorporate modern trends and topicality.

By successfully weaving these into its structured format, panto remains one of the most popular forms of entertainment in Britain. There are as many different explanations of pantomime and its history, as there are changes of the dame’s costumes.

Pantomime is a living, growing art form. The Commedia dell’arte from which it is derived has all but died. But today’s pantomime has survived by taking and expanding from the new ideas that each age has given it. And we hope that this gloriously eccentric British institution continues to do so. “Oh yes we do!”